just thought I would post this in case anyone was interested in a good deal on a local server setup. nice specs with good amount of storage and would easily support 10 concurrent 1080p software transcodes also free shipping. 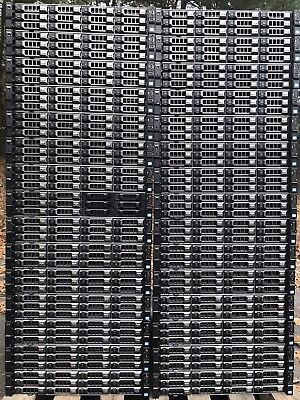 Nice for workhorses, Ive had clients running r710s for years without issues. So R720 will def last someone several years yet.

Ive got my eyes on these https://www.ebay.co.uk/itm/Dell-Pow...h=item591e01cbab:g:FMkAAOSwg-tcUGVi:rk:6:pf:0 The R740xds can take 3 rows of HDDs front, mid and read so they can be maxed out with NVME hdds. Expensive though.

https://ETB-tech.com always the goto supplier in the UK.

Why does this feel like a sales pitch? Don't get me wrong, i'm a hardware guy, I love a new toy to play with and if I lived in the US i'd choose somewhere with symmetrical gigabit fibre or better and literally have a DC in my basement - because you all live in something the size of the house from Home Alone* etc. right?

The thing is with GSuite you don't need 48TB local, also if you need 10 transcodes you want NVMe, and you can do it for a hell of a lot less. An x99, 2687w v3 ES (Almost 21k of CPU mark), 16GB DDR4 and a 500GB 970 EVO will give you the ability to do 10 transcodes and it's a lot cooler/quieter, or just buy a modern Nvidia card and used the patched drivers bare metal for Plex (though docker looks like it's possible now), or run a P2000/4000, it'd still be way cheaper for Plex. A modern i3/i5 would also do the same with iGPU a lot more efficiently.

R720's seem to be getting a lot more affordable now, I recently priced up another R210-II as they are usually inexpensive and short (handy for home racks) and noticed a R230 was basically the same price, but more modern CPU options/iGPU. Two 720's have gone for £280-320 recently (eBay) in dual CPU config with RAM/PERC etc.

* I'm aware it's a massively diverse and - having driven across it several times - huge country with everything from shacks to sprawling mansions and everything in between.

Was not a sales pitch and sorry if it came off that way.

Was just sharing something in the nerd chat. I have not yet done pg with g drive. I myself run local with 2 dell r220s in a vsphere cluster with vsan and use 2 synology rs1219s for media storage all of this plus a gaming streaming gaming server and unifi router and switch and cloud key leave in my home rack.

I use the short depth items for the reason you mentioned with a shorter home rack solution.

Not sure I agree with the need for nvme for 10 transcodes my setup handles it fine and all my media is in a raid 6 across 8x7.2k drives.

I do agree if a user is going to use g drive this is overkill even more so if they store media with the common x264 video codec and aac audio. At that point any low end x86 system will get the job done with enough memory to run desired containers.

And depending on what audio you want to store with media an i3 and certain i5s would likely have issues with 10 transcodes even with hw GPU transcode.

As for the noise unless your stressing this system you would likely be surprised at how quiet it runs.

I agree as well that there are cheaper ways to get started. Again this was just something for those looking for a good deal to run local and have plenty of resources to do in a nice easy package.

I am going to try a setup with g drive setup as soon as I get around to testing but am more comfortable with local stuff for now and just thought this was the appropriate place to post.

NVMe because if you're running 10 streams from a remote source, transcoding them to fill the pre-set buffer and then sending them out along with the obligatory NZBGet/Sonarr/Radarr etc. then you'll end up with horrific IOWait on SATA SSD upwards of 50% - i'm watching a remote box just doing NZBGet/Sonarr/Radarr, chuck in transcodes and it'll get very, nasty very quickly (about all it will do quickly). Comparatively my NVMe set-up rarely hits double figures no matter what is thrown at it.

Noise/heat on any system at idle are likely minimal, but you don't spend $1499 on a system for it to idle quietly in the corner do you

I'm not saying what you suggest isn't nice, for the right usage requirement it's very nice system, but in PG terms, unless you have a very good reason to run local storage, it's not really suited to this application and if you do need to do a lot of remote transcodes, much better options exist for the money/power envelope.
Reactions: 1 user

interesting on the NZBGet/Sonarr/Radarr aspect - I currently do not use newsgroups only torrents with non rar media. This would definitely add to the iops and bandwidth requirements if you are constantly unpacking media. I do not use nvme in my vsan setup but have only a 256GB sas SSD (10wpd) and then have a single 2TB sata SSD (1wpd) as the data drive. All my vms run in the vsan then just my media is living on the NAS 7.2ks. So if I do switch to news groups I might need to keep on eye on the io of the cache tier. currently no issues with current setup avg io latency is less than 1ms with a few spikes into the 3-4 ms range.

you must have better real world experience than me with the hw trancodes. from what I saw in my testing and feedback from users was not so great on the quality of the hw intel based transcodes. It was not much better with a gtx 1060 (with custom driver) due to this I have stuck with CPU SW based transcodes. Mainly for the quality difference. I am in the process of either converting my library or re-downloading based on codecs for rebuilding the library to reduce the need for transcodes. Been using PLEX for almost 10 years now so have alot of crap to create scripts for to find it all and still restructuring folders to have the ability to have sonarr and radarr profiles mange it all.

Torrents are much less CPU/IO intensive, but news is fast/generally more reliable, I went from the latter to the former and then back again over the last 20 years, gradually everything I moved to torrenting for (the free and open sharing without cost) became what the majority of torrent sites moved away from (ratio/status/paying to bypass rules), in the end I can saturate my connections 24/7 with news for a few quid a month, it's just more efficient.

HW transcoding has come a long way generationally on both intel and nvidia, old hardware/drivers were mediocre at best, but (almost) with each generation it's got noticeably better. if you want to sit down and screen dump/analyse frame by frame then yes, it's noticeably poorer than a high quality (slow) software encode, but it's comparable to a standard (fast) encode. I approach transcoding from a simple perspective: With minor exceptions, if you have to transcode, you're probably doing something wrong. Those exceptions are usually bandwidth limited scenarios such as a mobile device on 4G or an unsupported audio format/sub's. Other than that my general rule is everyone should be able to direct play everything if i've done my job correctly, I could just throw resources at the problem, but with a little thought and planning I can get better results than any software transcode by making better choices earlier in the process.

I approach transcoding from a simple perspective: With minor exceptions, if you have to transcode, you're probably doing something wrong.
Click to expand...