Welcome to the PlexGuide.com
Serving the Community since 2016!
Register Now
K

Hi all. New member here. I am keen to start a plex server for friends and family only - no more than 40 people. I’m considering the hetzner SX62 server and running PG.

I have very limited Linux knowledge but can happily manage the apps once it’s up and running.

Will installing PG give me a fairly secure server to use and not be open for attack or abuse. Or would I have lock it all down and do other stuff following installation of PG

Watching on:
Plex for Xbox One
Kodi OpenElec for Raspberry PI (plexkodiconnect)
Plex for Android

Server provided by Hetzner is a bare installed server meaning the server with a Linux install with no additional service neither security. You will get root access and password and are left on your own to install and secure it.
But fortunately, you are on a very active forum where information and support is available.
Expand signature
Hetzner Dedicated Server
Ubuntu 18
Reactions: 1 user

Welcome! By default plexguide installs fail2ban and ubuntu has iptables. Can enable port blocking and google security for apps in plexguide menu after installation. If you follow the install instructions and don't run everything as root, it's reasonably secure for the purposes. If in doubt, ask on forums. Hetzner servers have firewalls on their end you can setup further rules with.

As for server choice, might I suggest leaning toward something from the EX Line. With 40 odd users even 5-10 would struggle transcoding on that xeon. Passmark = 8200, plex recommend 2000+ for 1080p transcodes. Has no igpu so you can't enable hardware transcoding with quicksync, doing so drastically decreases server load and increases stream limits. If concerned about space just grab a gsuite unlimited business account (10$/m) and host everything on google like most people here do.. it's half the point of plexguide! EX61-NVMe is great bang for your buck outside of inital setup costs. Cheers.
Reactions: 1 user
K

thanks, Gsuite was my first choice but I heard someone I know have problems when more than 5 were streaming. They were not using PG though . I was going to consider adding an mp4 automator tool post download to optimize file format and ensure family members use the Plex kodi addon as i find that direct plays most things. Looking at the EX61-NVMe i know SSD works wonders for Plex metadata loading time etc so will consider this but set up costs are ridiculous .
Reactions: 1 user
M

Sorry . But the CPU is to slow for 40 persons

You can say PGPatrol kill all transcodes.
But not all Users can direct play.

The next is .
Dont use RAID0

40Tb is very large but dont use it.
Becaude you can use GSuite as HDD.

Look for better Server . Not for HDD place.
Reactions: 1 user

@kingelk Guess the main point is will struggle with that Xeon and multi user steaming. Coffeelake, not so much.

Xeon would maybe do 5x 1080p transcodes, Coffeelake about 25 and wouldn't be above 50% load. Do need a plexpass to enable hardware transcoding but it really is night and day for multi user shares imo. Reason why I would lean toward coffeelake over any skylake is much better support for newer codec formats (10bit/hevc/hdr+). Check support graph @ wiki.
https://en.wikipedia.org/wiki/Intel_Quick_Sync_Video

While setup cost is higher, monthly price is also lower. As you also mentioned it has 2x nvme drives which can easily be setup in raid0 for superfast metadata seeks. Your call at end of the day, just passing along suggestions from first hand experience.
Reactions: 1 user
M

RAID 0 (disk striping) is the process of dividing a body of data into blocks and spreading the data blocks across multiple storage devices, such as hard disks or solid-state drives (SSDs), in a redundant array of independent disks (RAID) group. A stripe consists of the data divided across the set of hard disks or SSDs, and a striped unit refers to the data slice on an individual drive.
Because striping spreads data across more physical drives, multiple disks can access the contents of a file, enabling writes and reads to be completed more quickly. However, unlike other RAID levels, RAID 0 does not have parity. Disk striping without parity data does not have redundancy or fault tolerance. That means, if a drive fails, all data on that drive is lost.
If you want more infos -->

if you want to use 2 x NVME

you have enought space and NEVER FsdasdG USE RAID 0

they have absolutely no data protection, reliability or the like due to Raid 0 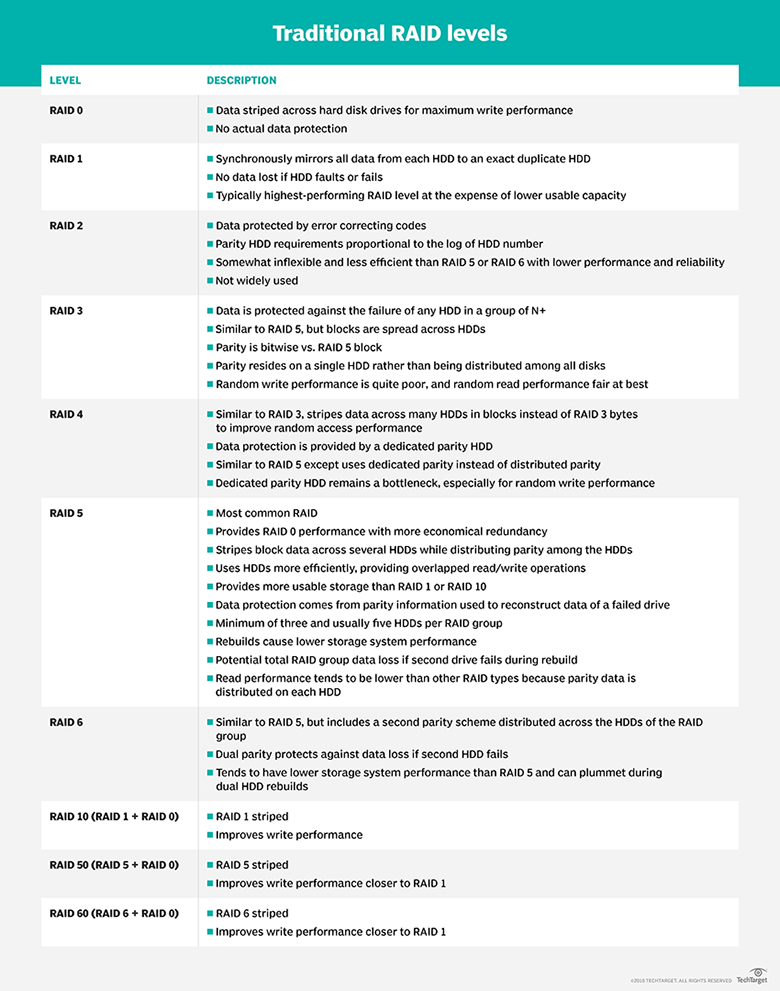 MrDoob said:
RAID0 never use RAID0
how the hell ..
Click to expand...

lol? well aware of raid formats and plenty of reasons to use raid 0. more so if you install on GCE cloud, it doesn't even support other formats. for starters plexguide users run backups and cron scripts right?. everything is disposable and re-installable within minutes. please don't go around advising people to avoid something that's quite helpful to a pure plex box.
Reactions: 2 users

Watching on:
Plex for Xbox One
Kodi OpenElec for Raspberry PI (plexkodiconnect)
Plex for Android
Reactions: 1 user
B

Never use RAID0 for anything mission critical where you are screwed if you get a disk failure.

I however use RAID0 on my hetzner using plexguide and seafile as everything is backed up to multiple locations and I lose nothing if a drive fails. The extra speeds I get more than make up for the inconvenience of a reload if anything goes wrong.
Reactions: 1 users
M

you made also daily backups from "Plex / sonar / radarr / and many more APPS ."
so then is RAID0 for this okay .

but i think you made never a " CONTAINER - BackUP " every day . the backups ^^ are stored on the local maschine not on GDrive .

bsp . in my case :
"" Plex Container Backup runs over 5h / complete BackUP from the Container / not the baseline Backup ""

The Plex BackUP ( 3 Day Shedular ) are stored " on the loacal / remote Plex "
so trust me for this operation is RAID1 or single use the best option.

and GCE is not the toppic of this thread,
K

thank you all for your comments and suggestions. I'm leaning towards the more powerful server EX61-NVME with Gsuite . Once i start i will be sure to come back and ask for assistance. Fingers crossed for me,
Reactions: 1 user
K

Hi all. Having read the forum some more . Could I get away with the Hetzner Cloud CX51 connected to Gsuite? My concern would be running out of HD space before the files are uploaded to Gsuite as I suspect the download is faster than the upload
Thanks
M

depending on how much you download,
I load about 1.9 - 2.5 TB on the up and down, and so far have not had space problems, so far everything is adjusted to each other.

But consider the Hetzner either upload volume or upload speed provides it is therefore in any case in the whole a limitation in it.

20TB included only UPLOAD / if you need more you must pay for it.
M

a little bit better then Hetzner and UNLIM -->

FYI all hetzner dedicated servers have unlimited 1gbit ports, including auction servers. Netup uses xeons like everyone else.. =RIP any chance of hardware transcoding which was my original point if wanting 40+ shares on a single server without breaking a sweat. Owned and used both. CX are vps/shared boxes. Randomly strained resources. No IGPU acesss. 20tb limit (only upload counts) Wouldn't recommend for plex unless only using with 1-2 people. Especially if downloading off same machine.
Reactions: 1 user
K

I had not considered the 20Tb bandwidth limit so cloud off the table again. Netcup cap your speeds. Initially I will be downloading (and uploading) a lot to build up content so want to use faster download. Once ramped up it will be smaller daily amounts for the odd movie release and as TV shows are aired. Thanks

Watching on:
Plex for Xbox One
Kodi OpenElec for Raspberry PI (plexkodiconnect)
Plex for Android
K

right i am testing PG on a the cheap cloud based hetzner server and once im confident ill progress to a normal server. I do have a question though. I have installed PG (top work to the developers) and can successfully set up the main apps i will be using and can access via the urls.

I hate command based instructions. Is there any way to get a desktop GUI?
I looked at x2go but to set it up on PG i need to find the log in details in Portainer and then i got lost as the WIKI is incomplete.
Thanks
M

Never run a GUI and PGuide.

kingelk said:
right i am testing PG on a the cheap cloud based hetzner server and once im confident ill progress to a normal server. I do have a question though. I have installed PG (top work to the developers) and can successfully set up the main apps i will be using and can access via the urls.

I hate command based instructions. Is there any way to get a desktop GUI?
I looked at x2go but to set it up on PG i need to find the log in details in Portainer and then i got lost as the WIKI is incomplete.
Thanks
Click to expand...

trust me, force yourself to use the terminal. even with a gui, your still going to be in terminal. luckily pg is a mini gateway between both. most traditional linux programs do not aggregate all this together.
Expand signature

@kingelk
If just wanting visual access to files, take a look at cloudcmd in apps.
Can be handy for what you mentioned, cleaning up/installing scripts etc.
Reactions: 1 users
M

there are countless ways

per script, per app, per file stream, just leave it.

So please stop it with the GUI.
there was a discussion about why and why it was not possible for 2 days.

All apps use VNC ports. Well clicked.
x2go vnc xrdp and all of the other crap. please let it be.
there are problems with the whole apps.